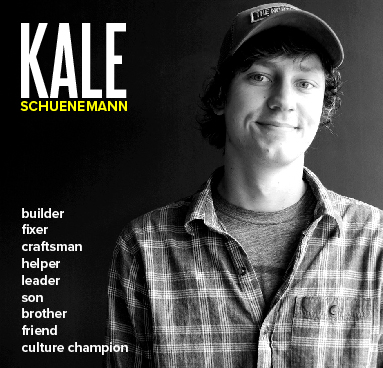 Our National Accounts Rep and Service Manager, Kale Schuenemann is a man of many talents.

You could say Kale grew up under the roof of Best Sign Group – and you’d mostly be right. He did occupy the office of his mom (and owner) Laura Tucker while crawling, and spent time at the company during his adolescence. However, it was in his early twenties when Kale came to work at Best Sign Group and no one could have fully understood how successful Kale would ultimately be among his co-workers, many of whom would ultimately become his friends.

It would be easy to think – well, his mother owns the company, so probably not much is expected of him. In fact, the opposite is true. Kale is held to the same standard as everyone else and he is consistent in rising above that standard. Why? When one of the production folks needs help to load up some new vinyl or move a heavy piece of acrylic or build a frame, Kale is the first to volunteer. Not only does he work well as a representative for our national accounts, he also leads the service team well, coordinating logistics and planning schedules. He is able to easily shift with the changes in the schedule, which can be affected by everything from the weather to manpower to unforeseen obstacles. He meets every single challenge head on and without being daunted. Try and discourage him, if you will, but you’ll find yourself outmatched by his optimism. He believes (or at least lives like he does) that there is a solution for every problem.

So, he makes a great employee. At a deeper level, he also is a superior and loyal friend.

Car trouble? Ask Kale. He is skilled and knowledgeable and has offered (and given) assistance to several folks when they were in need. He even helped this author with some repairs upon moving into a new house. He didn’t even wait to be asked. “What time are we helping you move and get things fixed?” he asked. How about some fun? He rides on the sand dunes in Oklahoma, floats the Buffalo, fishes, rides a four-wheeler, and races. Does he sleep? Yes, some. But his fervor for building, experimenting, tweaking, and improving everything he does drives him with an invisible, but seemingly relentless, supply of energy.

If there is a stigma about the priorities of the younger generation, it cannot be because of Kale. He represents something so opposite of laziness and self-concern that he makes an instant role model of perseverance, will power, and motivation. You’ll not find that Kale slacks in anything he does. He seeks to excel and perfect. He adds an irreplaceable set of skills and personality to BSG’s culture. Kale has a knack for making bad days better and showing folks how appreciated they are.

So, today, we shine the spotlight on Kale. He’ll shy away from any accolades, to be sure, but we’re sending them his way nevertheless. Thanks for all you do, Kale! You make us a better team.

About the Author: Shawn Griffin

This site uses Akismet to reduce spam. Learn how your comment data is processed.